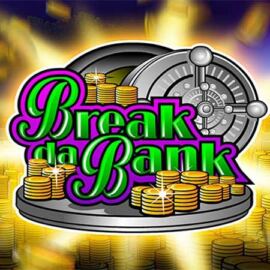 In the classic slot genre, there are normally a limited number of bonus features that largely drive a game. In the case of the Break Da Bank slot by Microgaming, most of the gameplay centres around the wild multiplier symbol, and it’s unusual in that it gives you different payouts for three of a kind depending on which payline you get it on.

This game is also atypical in that it only has three symbols (if you count the three bars together), and that adds a bit to the experience. Break Da Bank has a respectable RTP of 95.75% which is just below average.

The format of this game is very straightforward. There are three reels, three rows and five paylines. You can win on any horizontal line and any long diagonal across the three-by-three grid. Coins range from €1 to €25 apiece in this game, and you’ll need to bet five coins per spin to maximise your value from this game.

The Break Da Bank vault symbol is the most important symbol in the game because it’s a stacking wild multiplier. It shows up on all three reels and gives a chance for the most significant wins in the game. However, when it helps to make a winning combination, it applies a 2x multiplier.

That jumps up to 4x if two wilds are used to make a winning combination. Three wilds trigger one of the top payouts depending on the payline. Three of them on the first payline pays 1,000x; 1,200x on the second; 1,400x on the third; 1,600x on the fourth; and a whooping 2,400x on the fifth.

Three of mismatched bar symbols, no matter what they are in any order, pays 5x. This jumps up to the 10x level with a single wild, so even the smaller wins will give you some sizable payouts thanks to the wild multiplier in Microgaming’s Break Da Bank slot.

What’s our verdict of the Break Da Bank slot?

Break Da Bank is one of the older classic slot releases from Microgaming, and it shows. Don’t expect any visual suprises from this one. However, Microgaming have released a new Break Da Bank Again Megaways slot which you will find here on CasinoCrit.com soon. If you prefer old school casino themed slots then Break Da Bank will suit your needs.